This is an old revision of the document!

The TUM Kitchen Data Set is provided to foster research in the areas of markerless human motion capture, motion segmentation and human activity recognition. It should aid researchers in these fields by providing a comprehensive collection of sensory input data that can be used to try out and to verify their algorithms. It is also meant to serve as a benchmark for comparative studies given the manually annotated “ground truth” labels of the underlying actions. The recorded activities have been selected with the intention to provide realistic and seemingly natural motions, and consist of everyday manipulation activities in a natural kitchen environment. 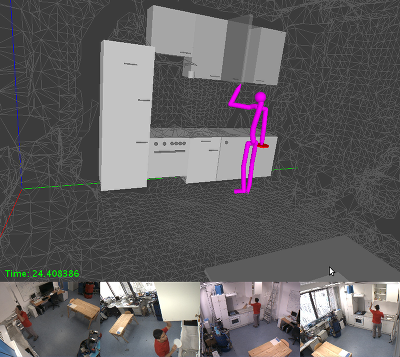 Description of the Data

The TUM Kitchen Data Set contains observations of several subjects setting a table in different ways. Some perform the activity like a robot would do, transporting the items one-by-one, other subjects behave more natural and grasp as many objects as they can at once. In addition, there are two episodes where the subjects repetitively performed reaching and grasping actions. Applications of the data are mainly in the areas of human motion tracking, motion segmentation, and activity recognition.

To provide sufficient information for recognizing and characterizing the observed activities, we recorded the following multi-modal sensor data:

A more detailed documentation of the data set is provided in the following Technical Report: The TUM Kitchen Data Set

Powered by bibtexbrowser
Export as PDF or BIB

Tracking starts at the video frame startframe and finishes at endframe, i.e. the first row in the pose files of episode 0-0 corresponds to the video frame 240 in that episode.

The task descriptions read as follows:

The video data is available in three different formats: