On Thursday, 2nd February, 19:05, the German TV show "Galileo" on Pro 7 will show a report about Rosie and James cooking Weißwurst, Bavarian-style sausages. After the show, the video will be available from here: http:www.prosieben.de/tv/galileo/videos/ As a preview, the YouTube video showing the Weißwurst demonstration: <html><iframe width="520" height="315" src="http:www.youtube.com/embed/gbIDPqb_2iM" frameborder="0" allowfullscreen></iframe></html>

Having made pancakes and Bavarian sausages, Rosie and James recently moved on to preparing snacks: During a public demonstration at TUM, Rosie toasted and garnished sandwiches, while James preferred making popcorn. Have a look at the video below!

The demonstration has also been featured in the IEEE Spectrum Automaton blog.

Rosie and James on TV 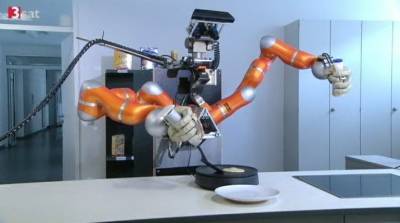 Our robots Rosie and James have been featured in the German TV show 3sat nano. The documentation, aired on November 17, presented different robotic research projects at TUM, including Rosie and James preparing pancakes together.

You can watch the video online in the 3sat mediathek. Other videos of the pancake experiment can be found in our YouTube channel

We are glad to announce that the European Collaborative Project FP7-ICT 287513 SAPHARI started officially on November 1, 2011.

This four-year project is devoted to the Safe and Autonomous Physical Human-Aware Robot Interaction.

Additional information can be found on the project web site http://www.saphari.eu.

During the Humanoids 2011 conference, there will be a talk explaining the research and technology behind our pancake demonstration. Below is a short video of our robots preparing pancakes for those who have not seen it yet. In addition, we will have several poster presentations: One paper deals with using the Contracting Curve Density algorithm in robotic applications, a second one is about learning which optimization principles a human uses in order to imitate observed motions. The two other papers deal with appropriate tool use and with computing motions for pushing objects around in the desired way.

We are looking forward to meeting you at the conference!