Talk at the EUCogIII Members Conference 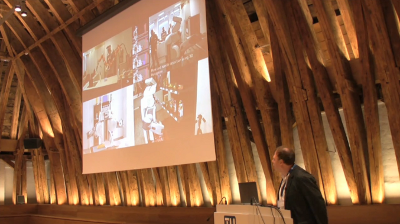 During the 1st EUCogIII Members Conference, held on February 23-24 in Vienna, Michael Beetz gave an invited talk about Cognition-Enabled Control of Everyday Manipulation. The EuCogIII conference was organized by the European Network for the Advancement of Artificial Cognitive Systems, Interaction and Robotics.

The talk gave an overview of cognition-enabled robot control as a computational model for controlling autonomous service robots to achieve home-chore task intelligence. For the realization of task intelligence, this computational model puts forth three core principles, which essentially involve the combination of reactive behavior specifications, represented as semantically interpretable plans, with inference mechanisms that enable flexible decision making. The representation of behavior specifications as plans enables the robot to not only execute the behavior specifications, but also to reason about them and alter them during execution.

The presentation slides and the video of the talk are now online in the ShanghAI lectures repository.